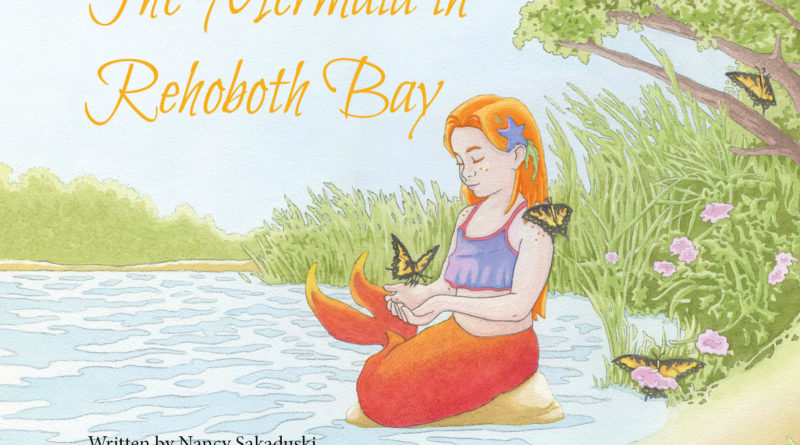 A storm has hit coastal Delaware and washed a young mermaid named Nibi across land and into Rehoboth Bay, separating her from her family, friends, and ocean home. Terra, a young girl who lives nearby, is afraid of the water, so she misses out on swimming with her friends and wading in the bay to collect shells. The two discover each other, become friends, and find a way to solve their problems together.

The Mermaid in Rehoboth Bay is a story that celebrates the beauty of the sea and tidal areas and depicts two strong female characters who are able to confront their fears and achieve their goals on their own. Great care has been taken to depict realistic, age-appropriate child-like characters that readers will identify with. The story addresses themes of friendship, girl empowerment, respect for differences, love of nature, and overcoming fears to achieve your goals.

Children will love the highly detailed illustrations that depict two parallel story lines–one that follows a girl who lives near the sea but is afraid of the water, and one that follows a child-like mermaid who finds herself far from home. There are no Prince Charming saviors here, no adults swooping in to save the day. The child characters work out a solution together. And while there are many lessons to be learned, young readers will discover them on their own. The text in The Mermaid in Rehoboth Bay is intentionally minimal and unobtrusive. In fact, there are several spreads with no words at all to distract from the spectacular illustrations, which include a night scene with glowing fireflies and luna moths, and a dream of an undersea world that includes jellyfish, dolphins, and whales. The story’s end is wonderfully satisfying and appropriate.

Observant readers may also discover some hidden gems. For example, each character has a companion animal (a seagull and a sea turtle) that follows her through the story. These animals never speak or appear to be anything other than natural creatures, but they spark discoveries and ideas. Each character also wears a necklace of found items, and they add to their necklaces as the book progresses. The mermaid is collecting things that are unusual to her– man-made debris found in the ocean (a soda can pull-tab, a discarded sand shovel, a key) and the child is collecting things that are unusual to her– items from the ocean found on shore (seashells, a sand dollar). Adults may enjoy helping children notice the differences between the bay environment and the ocean. The illustrator has depicted realistic habitats and creatures. Readers may also be interested to learn (in the “Note to Parents and Teachers”) that the characters’ names are significant. The mermaid’s name, Nibi, means “water” in the Algonquin language. The girl’s name, Terra, means “land” in English and several other languages. The Mermaid in Rehoboth Bay is a book with many levels of meaning and enjoyment. It’s one that children (and their parents) will treasure and want to read again and again.

This book is beautifully illustrated and laid out, making it a pleasure to linger over each page, explore the paintings, and then eagerly move on to the next page. Masterfully executed. It’s a pleasure to move from front cover to back cover. -Delaware Press Association judge, when awarding The Mermaid in Rehoboth Bay 1st place for book design.